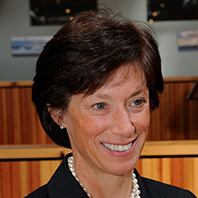 She was a Senior Vice President at Putnam Investments in Boston from 1998 to 2012, during which time she conducted equity and credit research on financial companies around the world. Prior to that, she worked for fourteen years as a sell-side analyst in New York including positions at Lehman Brothers and Goldman Sachs. During this period, she was frequently voted to the Institutional Investor Magazine All-America team.

Jean is a Chartered Financial Analyst and a member of the Vermont CFA Society. She earned a B.A. in Economics from Middlebury College and an M.B.A. in Finance from New York University. In her spare time, Jean is an avid skier and sailor.